Ever wanted to create your own Family Biography? Heritage Media Group can help!

Eyes On You Salon and Spa is proud to introduce one of their newest preferred vendors!

Heritage Media Group produces custom high quality family video biographies. These videos include interviews with elder family members that keep the history and stories of families alive for grandchildren and future generations. We include family photographs, home videos and films, music, and even archival materials to create a full-length documentary of one’s family. This becomes a lasting heirloom that can be easily shared with family members around the country and the world.

Walter Schlomann is an accomplished award-winning director, producer and editor of independent films, music videos, documentaries, and promotional videos. His programs have aired on Network Television, PBS, History Channel, TV Land, Biography Channel, and Comedy Central, and he has collaborated with rock stars such as Michael Stipe of REM and Cyndi Lauper. He has filmed helicopter action scenes in the Australian Outback, directed Scotty of Star Trek fame on a wild aerial ride through New York, filmed in the jungles of Brazil and even worked with mermaids, crocodiles, and kangaroos. He has interviewed people from all walks of life including artists, CEOs, veterans, holocaust survivors, philanthropists, and entrepreneurs.

In 2007, Walter was approached to make a biographical video of an acquaintance’s father. The success of that project and the several that followed has led to the creation of Heritage Media Group, with offices in New York and Tampa. Walter incorporates the know-how of a bona fide filmmaker with the meticulous care of a family biographer to deliver a priceless gem for future generations.

Contact Heritage Media Group for more information or to view some of their work visit  www.weconnectgenerations.com 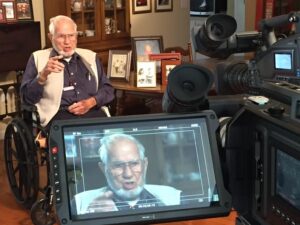 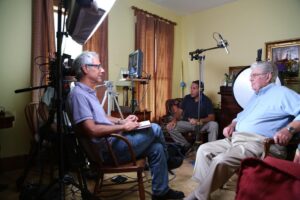 Lydia Collins
16:45 30 Aug 19
Not being from Tampa, I was worried about finding a good make-up artist and hair stylist for my wedding. One of my friends recommended Eyes On You, and I decided to do a trial with them…I loved it so much I didn’t have to do any other trials anywhere else! When I decided to change the look for the actual wedding day, Jennifer Morgan listened attentively and did EXACTLY what I had in mind. I received so many compliments on my hair and make-up on my wedding day, and more importantly my [new] husband LOVED it! Also, Amberlea Willis went above and beyond with my mom and bridesmaids, making sure that they were completely happy with the results -even if that included trimming bangs and redoing a hairstyle! Thank you so much Eyes on You for making us look beautiful!read more

Stephanie Summers
00:49 29 Jun 19
I am a regular customer of Eyes on You Salon, and they also did my wedding hair and makeup, which I was in love with!! Jen Morgan did an amazing job! It was exactly what I wanted and more...my hair doesn’t hold curl well but it held up the whole 5 hours of my outdoor wedding in the May humidity! Also Ashley Cobb did my bridesmaids hair and makeup and they also looked so gorgeous!! I definitely felt like a princess on my wedding day and I highly recommend them!read more

Jacqueline Juric
03:12 09 May 19
Absolutely love this place. After a hard search since moving here 5 years ago I finally found myself a great salon. I have had many services done by Amber Lea and I am always impressed from highlights to spray tans to purple hair. Her positivity and welcoming manner makes every experience a great one. She pays great attention to every detail and I am confident leaving the salon that all eyes are on me walking out that door. Definitely found my hair stylist here in sunny Florida. Ask for Amber Lea!!read more

Heather Oliva
00:27 19 Apr 19
Eyes on you products are top of the line but affordable. They have many color options and I love love love how soft the hair feels!! The tape in extensions work perfect for me and are so easy to use. I always get compliments on my lashes. I love how light weight and beautiful they are. I highly recommend their products!read more

Ashley Cobb
17:01 18 Apr 19
Eyes On You Beauty has a wonderful selection of lash extensions. There are different styles and length variations for any occasion or mood! I love to use them on my clients and all of my lash extensions clients rave over how natural they look and feel. I would HIGHLY recommend them to any lash technician looking to find a great product that will keep their clients coming back for more. I would also recommend their online education which is how I got certified in lash extensions!!!! Do yourself a favor and sign up ASAP! I was able to work at my own pace in the comfort of my home! Very reasonably priced!read more
See All Reviews

Become a trained and certified extension specialist with the best educators in the industry. Learn step-by-step how to be an extension expert today using Eyes On You Beauty products exclusively for salon professionals!